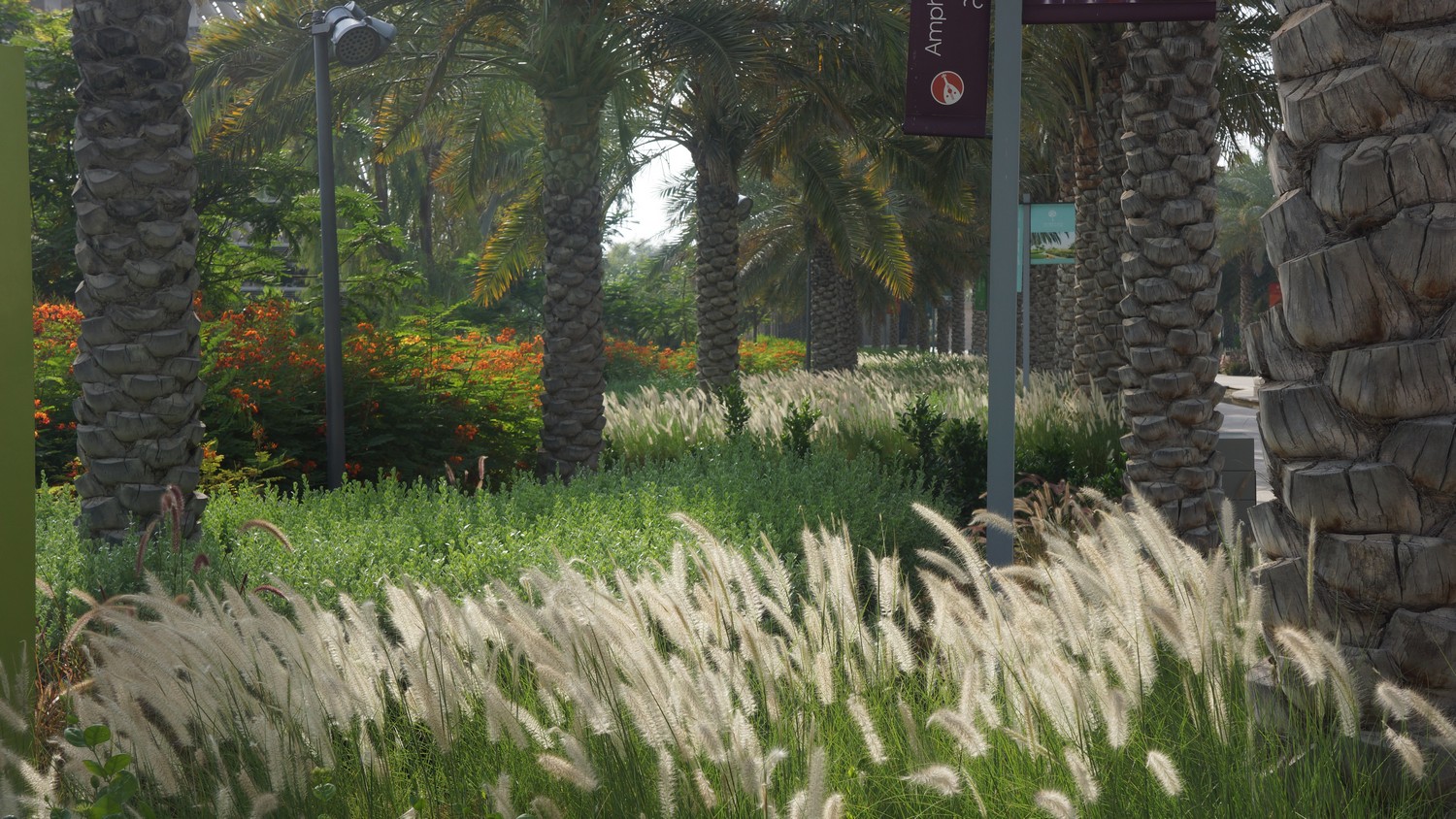 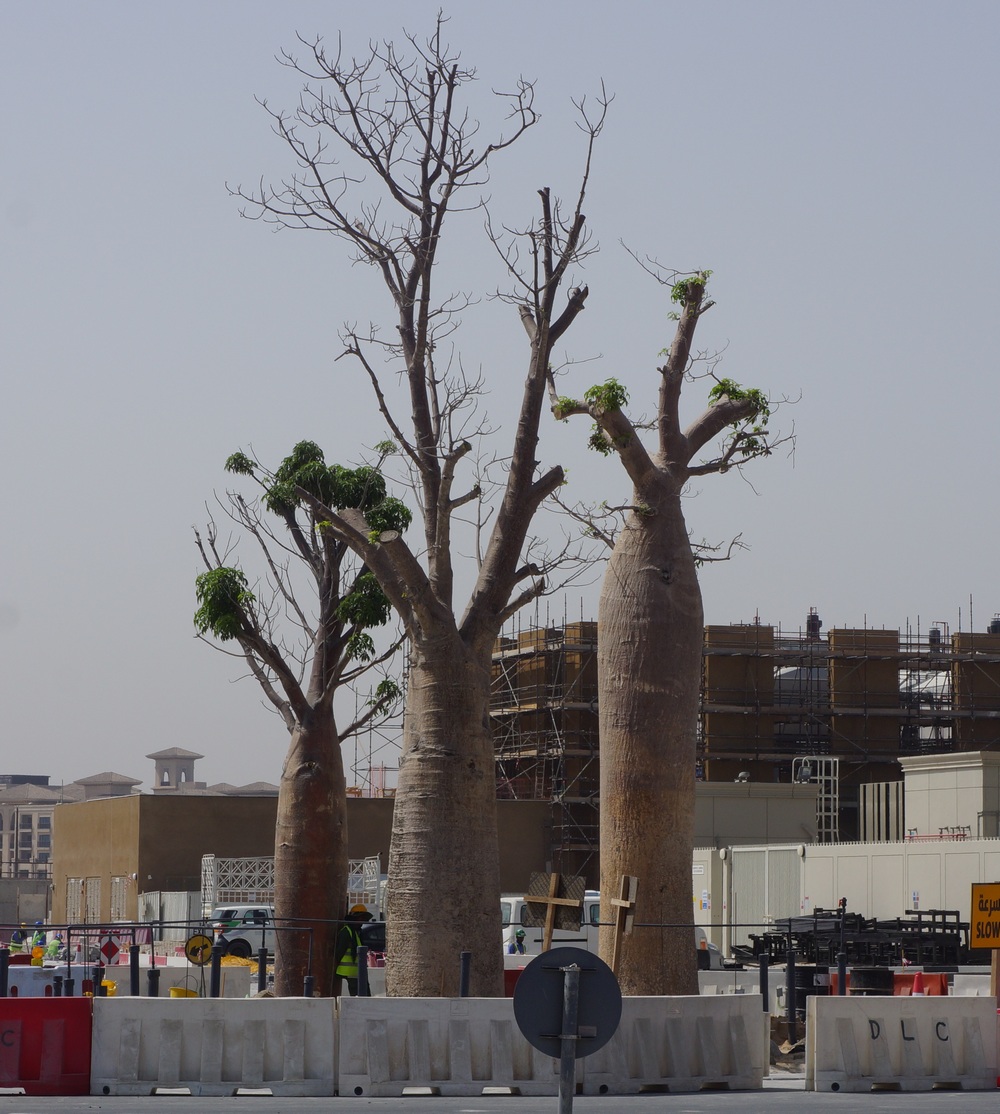 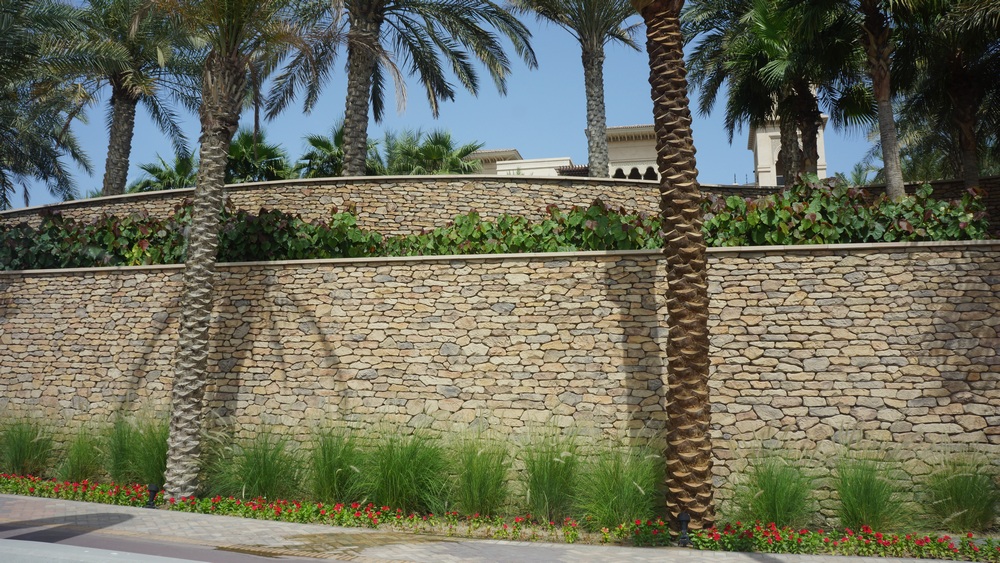 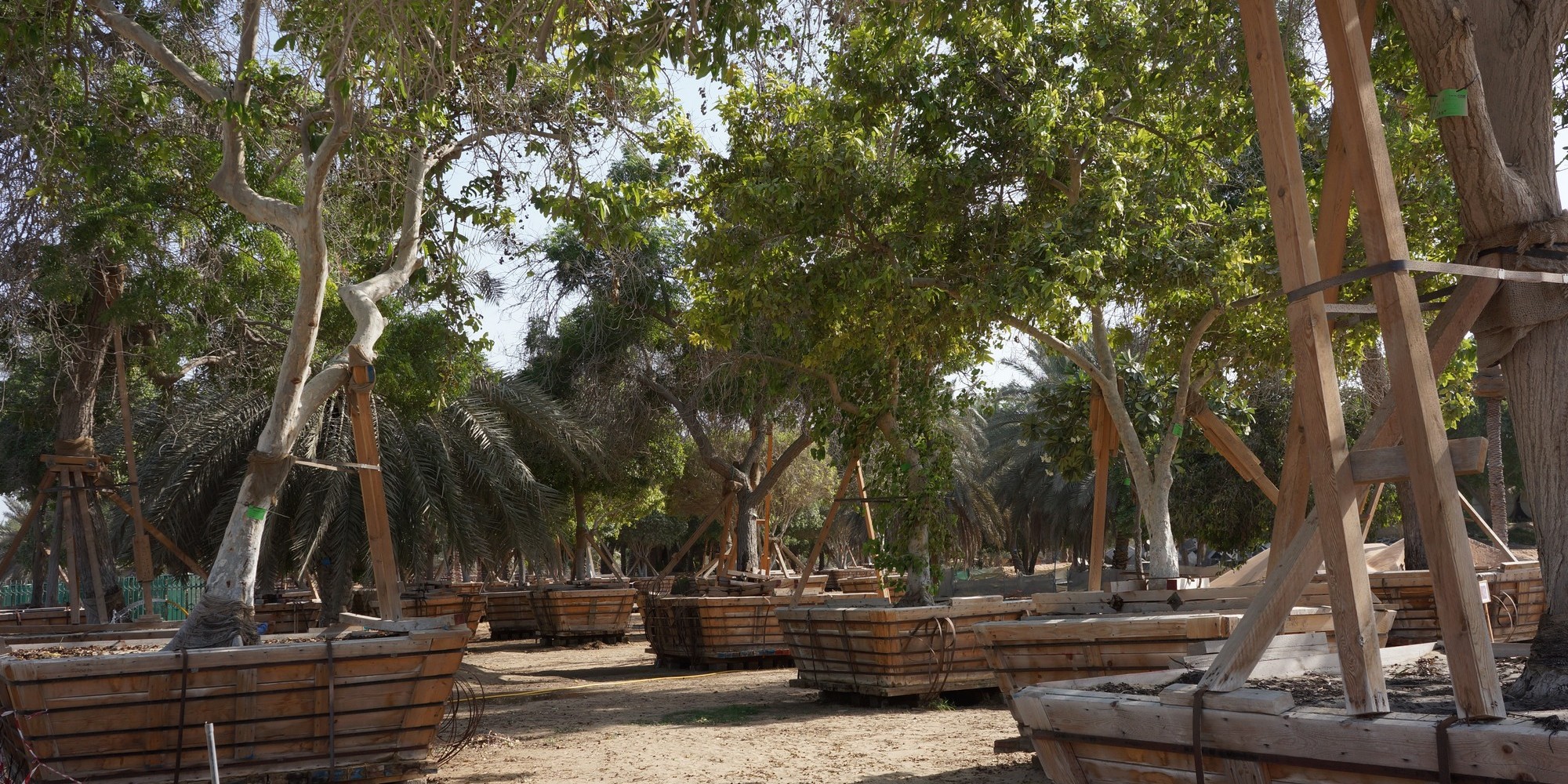 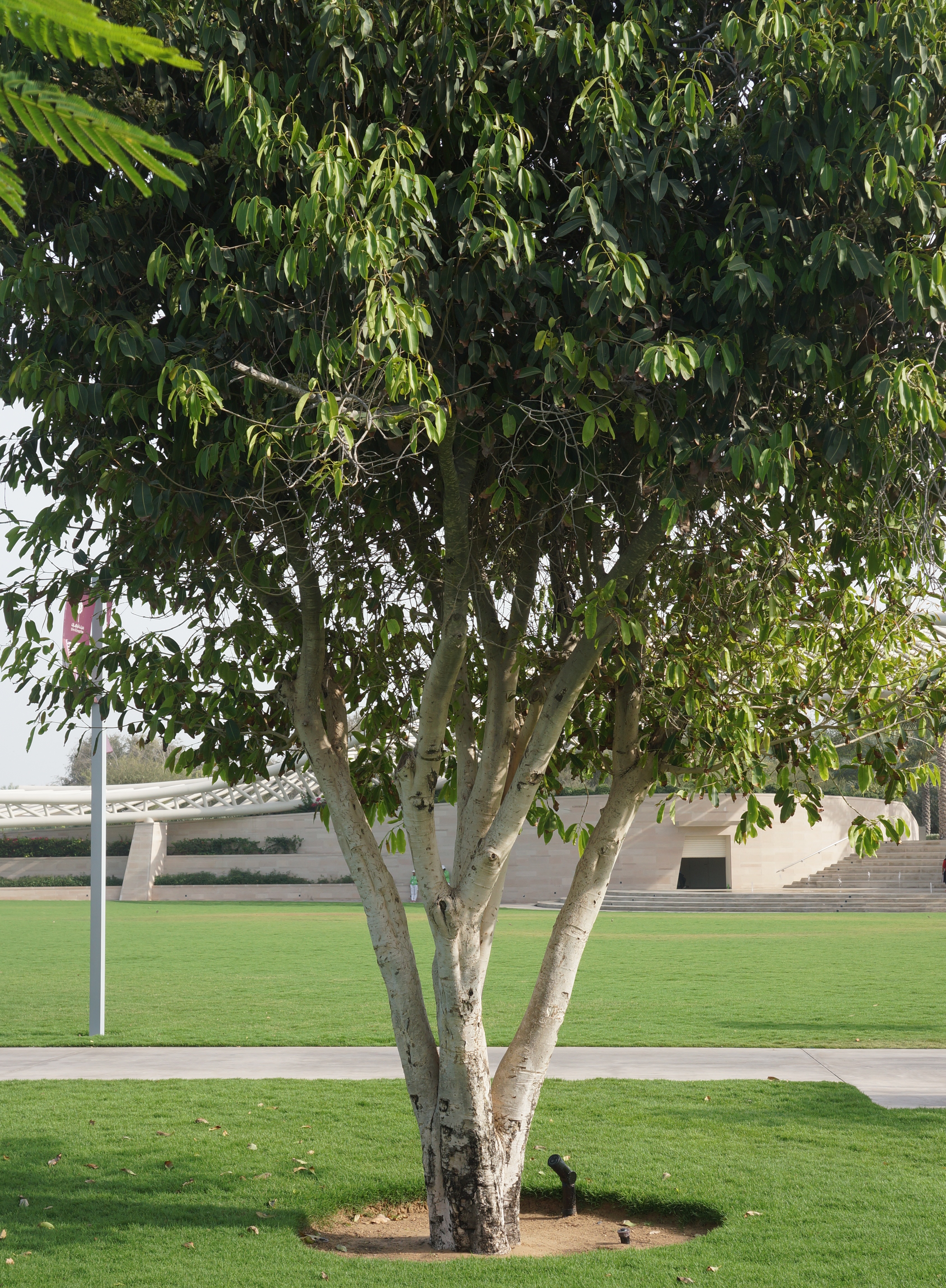 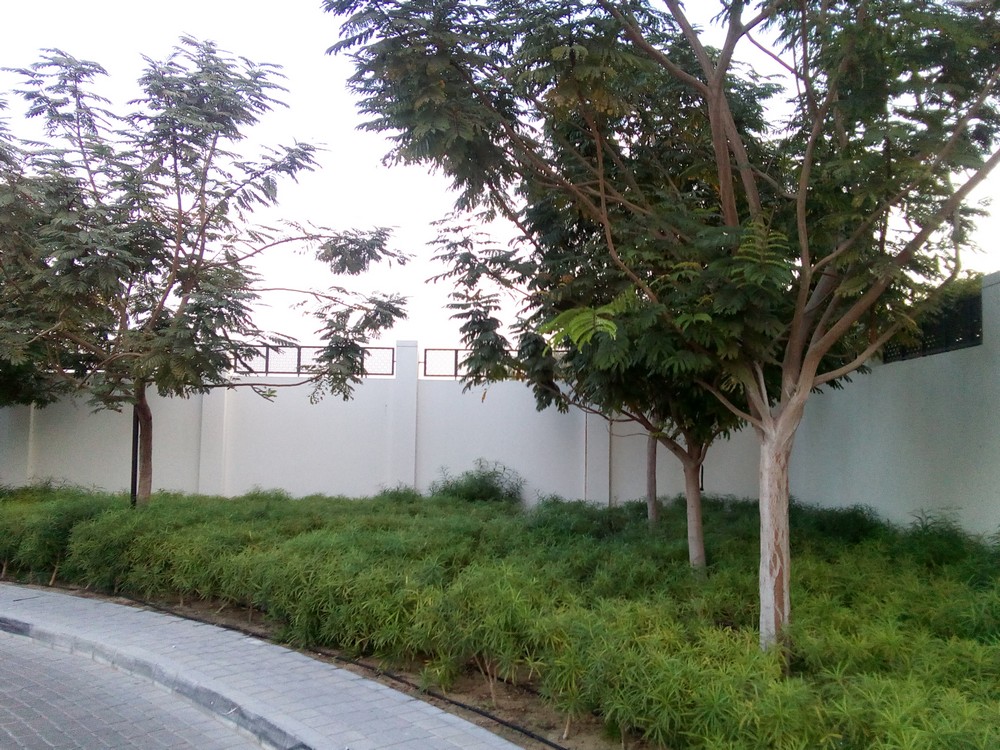 On my most recent trip to Dubai, I enjoyed walking through some of the new landscapes that emerge as projects are completed.  The UAE, along with most regions of the Middle-east has a rather limited palette of plants to work with (although that is growing as new plants are tried). What struck me, however, was how poor the quality of nursery stock was in some cases and what problems are being created for later, especially with regards trees.

This is not new, nor confined to this part of the world but it bothers me that new areas of urban green are sometimes given a poor start with sub-standard nursery stock, often flown in from other parts of the world.

Simple pruning at an early stage would have improved this tree’s framework, removing crossing and rubbing branches.

Wandering around a residential area in Jumeirah, I came across some newly planted Delonix regia, one of my favourite exotic trees.  At first glance it looked nice, a simple planting of trees and groundcover but on closer inspection I was somewhat dismayed at the condition of the them.  The problems of poor framework were caused by their time in the nursery, not due to planting, although some of them could have been rectified by a vigilant planting crew. 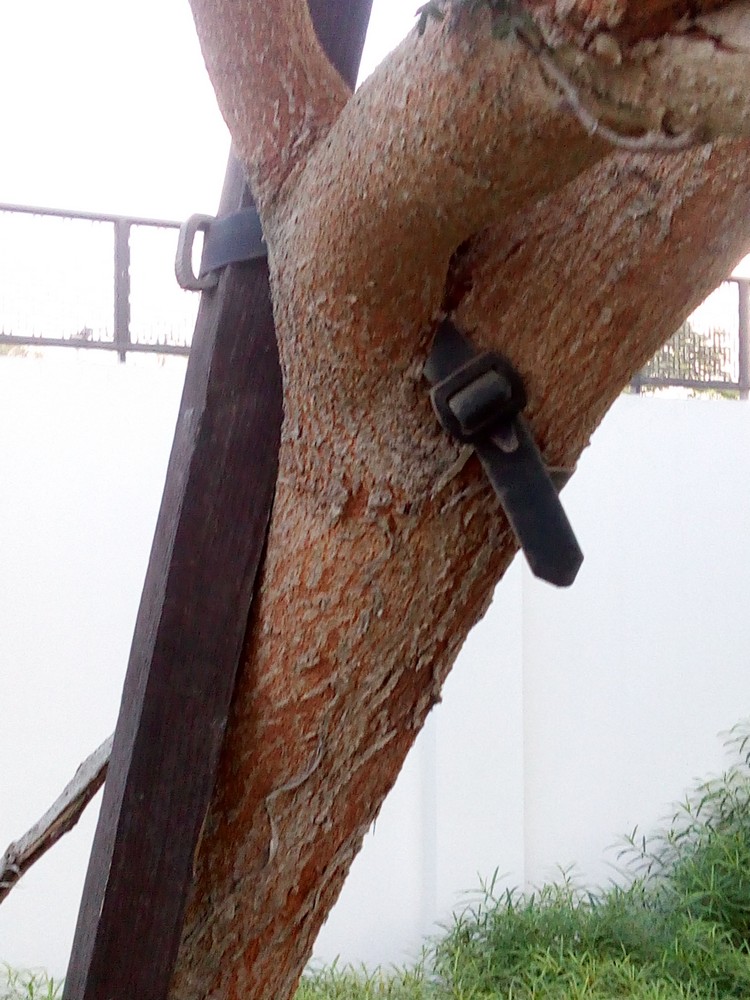 Many of the dozen or so trees had ties left on which the tree had grown around completely, making them impossible to remove.  As the planting is only around two years old (by my estimation), these may have been on the trees from their time in the nursery.  Possibly the planting was older and pre-dated the building they were attached to and the trees then grew around the ties after planting.  Either way, it’s a strong indication of neglect or lack of care. In the picture below, all the bark ridge above the tie may indicate “included bark” – bark sandwiched against bark, preventing live tissue growth and a strong branch collar formation. 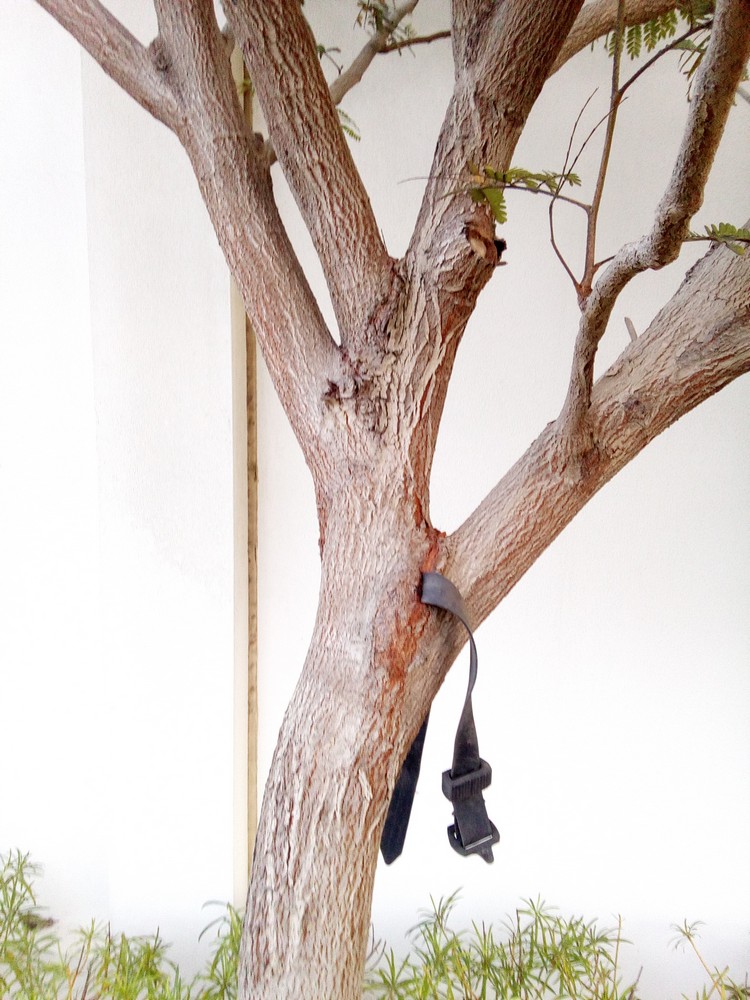 The tree tie is trapped with “included bark” at the branch collar, which indicates a potentially weak branch join.

Several problems are arising here: pre-planting care in the form of correct formative pruning (five minutes with a pair of secateurs) and Post-planting care in terms of releasing planting ties – if they were not simply left over from the nursery days.  If there is no way to go back and release the ties, a bio-degradable tie should have been used. 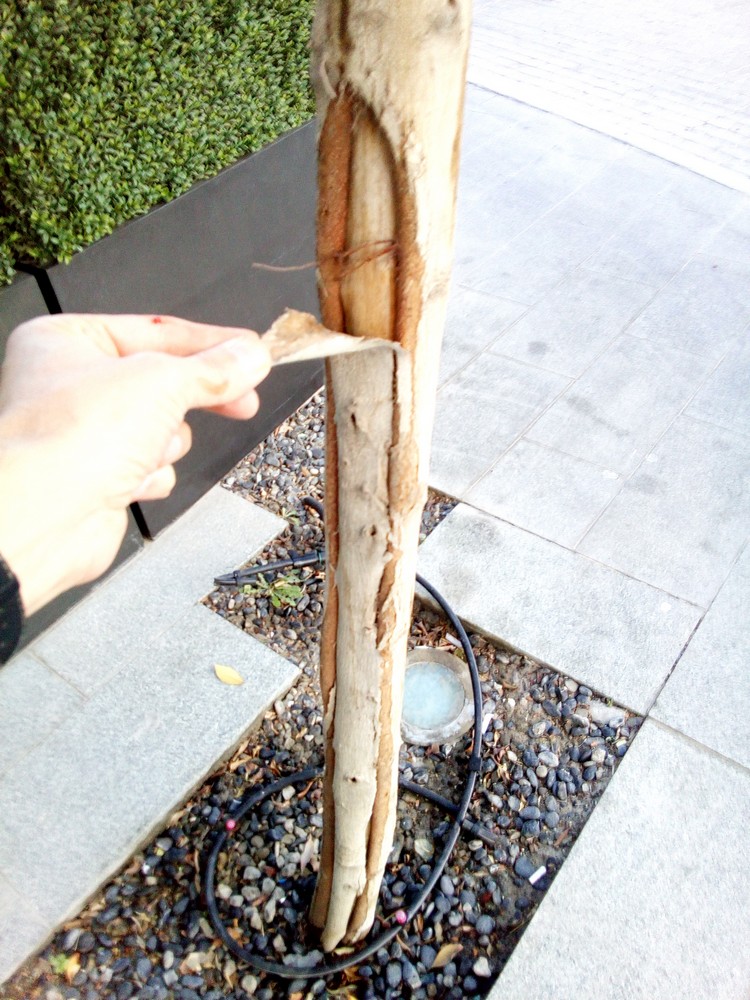 This Ficus nigra was most likely damaged long before it was planted in this location.

Damage to the main trunk or structural framework of a tree might go unnoticed when the trees are small but cause major problems as the tree gets older and puts on size and weight.  This can range from the cosmetic to the potentially dangerous in a large tree and at this stage the remedy is costly and the expertise hard to find.

As fast-growing cities like Dubai mature, the needs of landscape shift from creation (in a hurry) to maintenance (at a constant pace).  Skills, awareness of the need for – and absence  – of skills, will become more and more urgent.  If Dubai wants to keep it’s beautiful, green mantle, then there is a whole new phase of arboricultural care awaiting to be discovered and initiated. I have carried out trees assesments and given basic training of correct pruning methods in the UAE, but that has hardly scratched the surface; there is a lot more to be done.

Trees are the urban, biophilic, blanket that clothe and surround the concrete mountains we build.  Trees make hot places not just bearable, but unbelievably beautiful.  Trees absorb dust, cool the air, add moisture and oxygen and enrich our Souls.  We need to honour and look after them, so that they can look after us.

This article first appeared in Pro Landscaper Gulf.   It is based on tree consultancy work I have undertaken in Abu Dhabi in recent years.

Irrigation is taken as a necessity when landscaping in arid climates.  It is a view that I wouldn’t like to completely contradict, yet I have seen a fair bit of evidence that tells me many plantings, and trees especially, are over-watered.  Of equal importance is the fact that many of the irrigation methods are wasteful of water and sometimes damaging to the trees themselves. 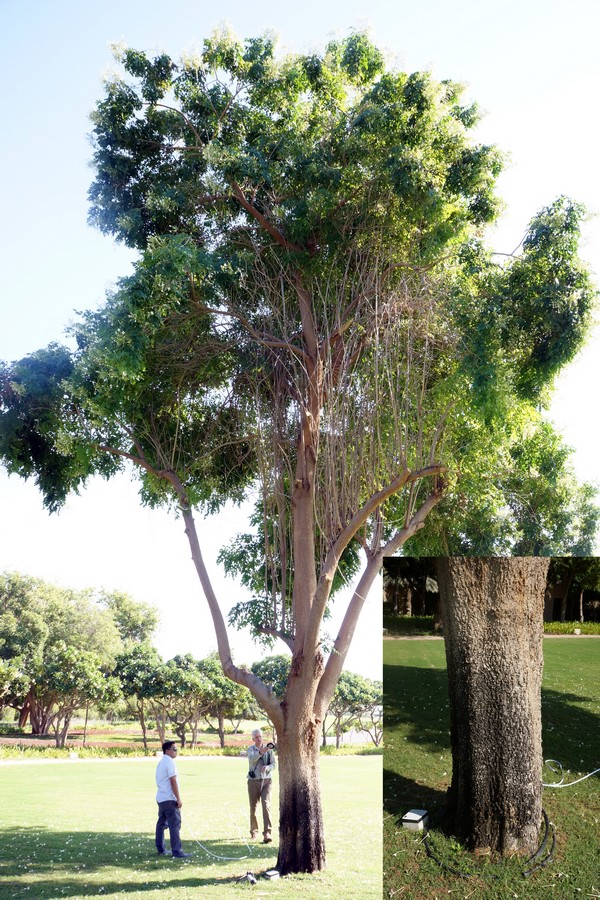 Lawn Watering with sprinklers is damaging the trunk of this Millingtonia

We have to discern the different needs of trees and understand that what is necessary for one species is overkill for another.  I particularly speak of natives verses exotics.  Ghaf and Sidr you will see growing wild and without irrigation but imported exotics need a regular supply.  I have seen Ghaf blown over in irrigated plantings, caused by shallow rooting from an easy water supply.

Bacterial wetwood in Delonix regia caused by overwatering. It also reduces the flowering, for which these trees are famous.

How the water is put on is just as important; pop-up sprinklers in lawns can damage the trunks of trees, causing aerial rooting in species like palm or fig, discolouring bark and causing stress-induced rots to occur in others.  Exotics like the Flame tree (Delonix regia) get over-watered, causing a reduction in flowering and a susceptibility to bacterial wetwood (slime flux). Even drip irrigation is not ideal, as it applies the water at the surface and promotes shallow rooting.  Trees with shallow roots are vulnerable to drought and so dependent upon the irrigation supply – a vicious circle. 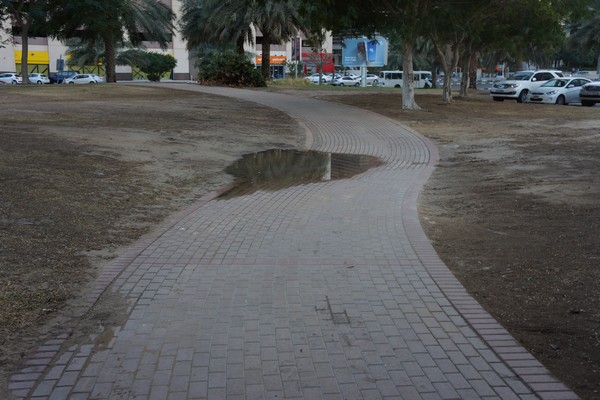 In the UK, we are used to putting in a subterranean irrigation ring around trees, which gets water to the tree roots at a deeper level.  For watering established trees, perforated tubes can be utilised, inserted vertically throughout the root zone and either manually watered, or connected to standard irrigation systems.  Supplying water at a slightly deeper level means less water used and wasted. A word of warning though – most feeding roots occur in the top 300 – 500mm of soil, so watering too deeply can also be wasteful. 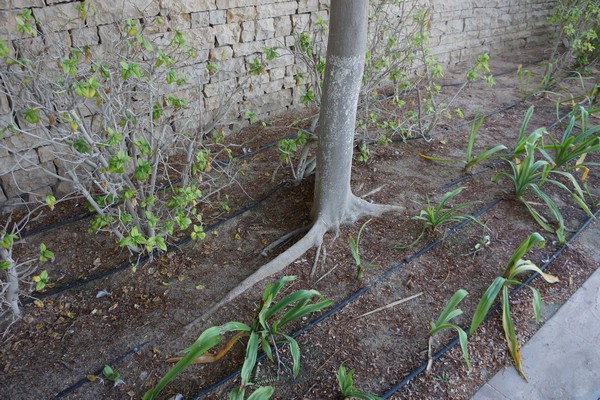 Tree roots growing along the line of surface irrigation pipes

In coastal cities, problems can arise from a naturally high-level, saline water table.  Halophytes (salt tolerant plants) have evolved to cope with this, but for some imported species, salinity can be a problem.  You also have to be aware of the quality of the irrigation water itself, which if drawn from the ground, may have a high saline content. Get your water supply tested if you are unsure.

Ultimately, I believe that planting styles and expectations of “landscape” must change.  A more natural style, with more xeriscaping and use of natives or other arid loving plants from different parts of the world (but from similar conditions), will emerge.  More important, in my view, than using strictly native species, is building plant communities that function and thrive in place without much human care or maintenance.  As climate zones shift rapidly around the world, nature cannot keep up and it will be down to us to create landscapes that sit well in their altered environments, whether native or not.  I believe we can do this with considerably less use of irrigation.  The water we do use should then be grey water (from taps and sinks), which is a much better way to conserve processed water use. 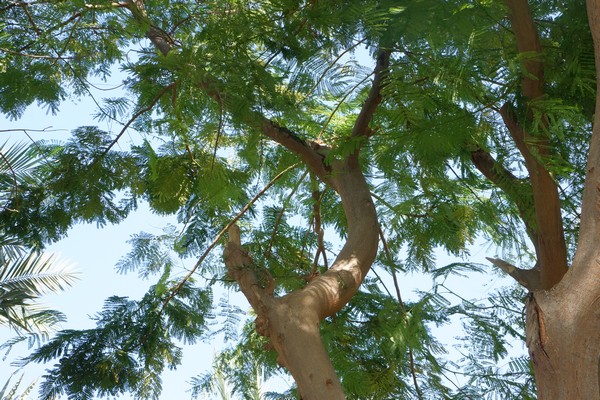 The goal has to be minimal water use, natural, ecologically benign planting and urban environments which feed our biophilic needs for connection to nature. 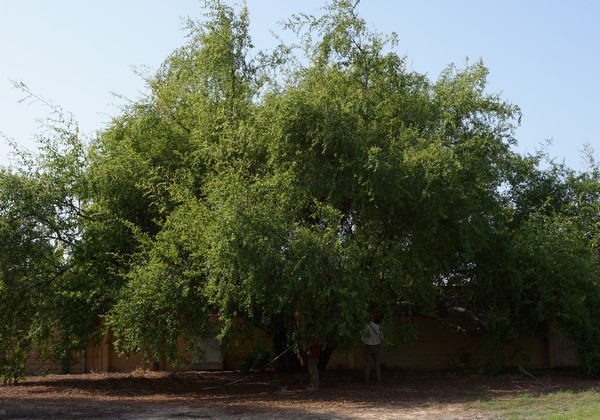 Zizyphus spina-christi, crown of thorns tree. A native of the UAE